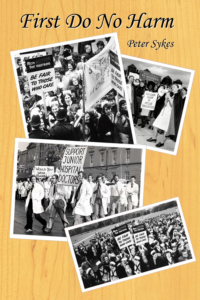 My first novel ‘The First Cut’ was published in 2011. It described Paul Lambert’s misadventures as he was thrown, bewildered and unprepared, onto a busy surgical ward as a newly qualified doctor.

This was followed in 2013 by ‘Behind the Screens’ which tells real-life tales at a time when care and compassion ruled supreme in British hospitals. Some of the stories are humorous, some sad, others poignant, but all are very ‘human’. The novel also follows Paul’s chequered love life and unveils some of the ‘high jinks’ that doctors get up to when off duty.

‘First do no harm’ is set in 1974 and the City General Hospital is in crisis; the nurses furious that their claim for better pay has been refused, the consultants insisting on the right to treat private patients and the junior doctors demanding a reduction in their hours. The NHS is about to be disrupted by the worst industrial action it has ever seen.

This novel interweaves the twists and turns of the political struggle with stories of day-to-day life in the hospital. It follows the nurses as they march to Downing Street and the doctors as they come to blows with the dynamic Secretary of State for Health, Barbara Castle.

Paul Lambert and his young wife nurse Kate are alarmed at the devastating effect the disruption has on their patients. Hadn’t their colleagues agreed to abide by the Hippocratic Oath with its simple message ‘First do no harm’? They are desperate to avoid being drawn into industrial action – but are destined to be involved against their wishes.